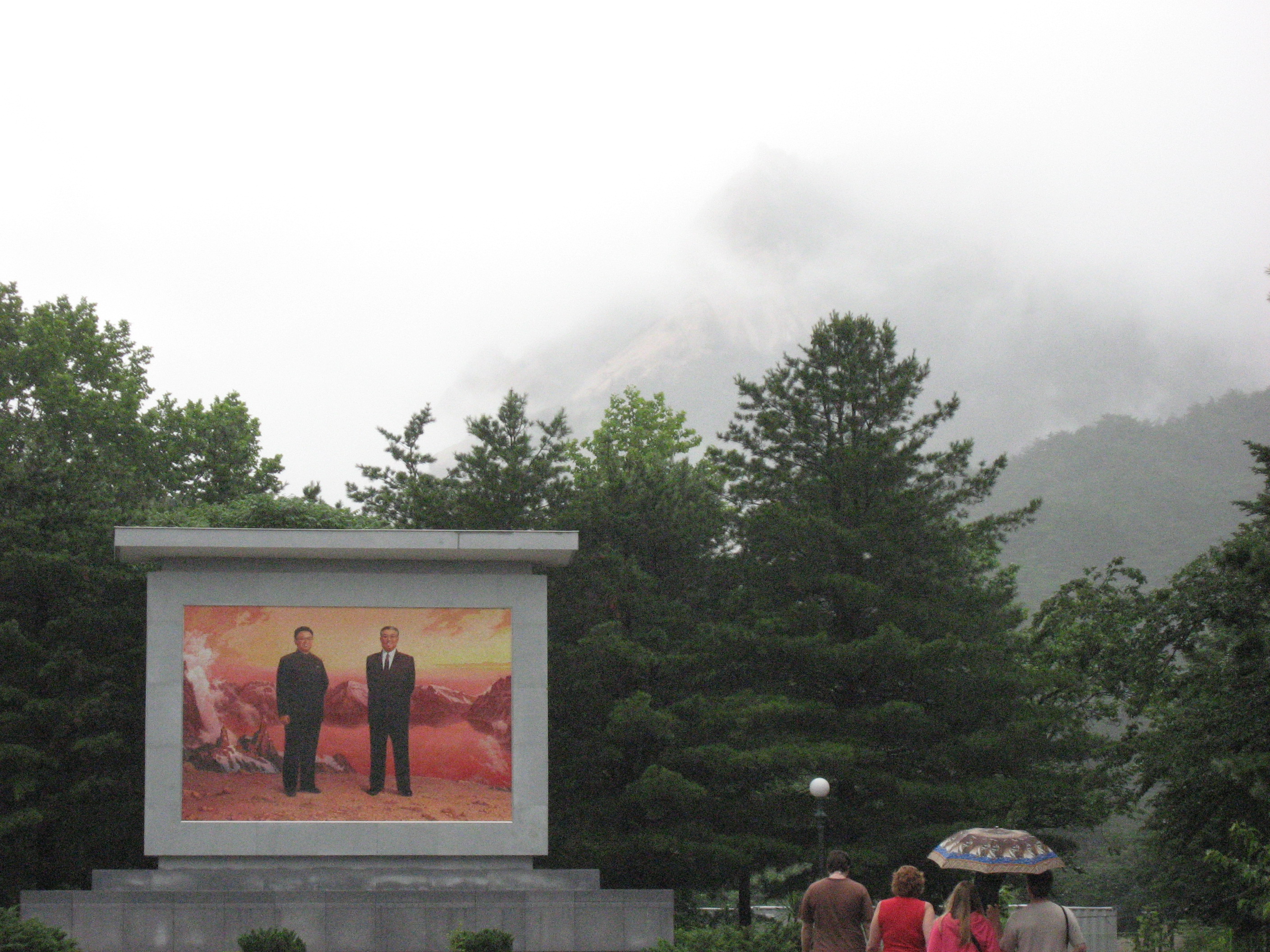 Mural of Kim Jung Il and Kim Il Sung. The mountains in the background of the mural match the mountains behind the mural.

Being an American means that certain people don’t want you around and there are some places you are not allowed to go. One of those places in North Korea. This is why I was very surprised and excited to go on Adventure Korea’s inaugural trip to Guemgangsan (Mt. Geumgang). I had heard that North Korea was desperate for foreign currency and that tourism was one of their best (legal) ways to get the inflow of outside cash.

The weekend promised hiking on a rocky, forested landscape, some traditional North Korean entertainment, and, of course, a peek into a completely closed nation (and a founding member of the “Axis of Evil”).

Along with the help of the Hyundai Asan corporation, the DPRK has opened up the Geumgangsan (Diamond Mountain) Range area for foreign tourism. This area in in the south east corner of North Korea, with the De-Militarized Zone (DMZ) to its south and the East Sea (Sea of Japan) on its east. Foreigners (excluding Japanese & South Koreans) have been allowed to visit the area since October 1999, but they had to travel by boat until September 2003 when a land route through the DMZ was opened Our guide told us that the journey to Geumgangsan had taken 8-14 hours by boat, but our land trip was only about 10 minutes.

Red-painted names of patriots, heros, and slogans cover the rock faces throughout the Guemgangsan forest.

Photos were not allowed on the drive through the DMZ, but our eyes were wide open to the interior of the 4km strip of land that has had almost no human contact for 50 years. After six hours of joking on the bus, the mood became a bit more serious and we saw our first DPRK soldier (and his Kalashnikov machine gun equipped with a shiny bayonet) at the Northern Demarcation line.

Arriving on the north side of the DMZ also increased tension levels. The northern immigration checkpoint tent was flanked by a two lane highway on one side and a rail line atop a levee on the left. No trains were seen, but the raised railway gave DPRK soldiers a 10 foot high perch with which they could observe their new visitors. The soldiers were armed only with a whistle and a small red flag which, we were told, they would use if they spotted any foreigner breaking a visitation rule. Two of the infractions we were warned about included taking pictures of anything, or smoking too far (more that a few feet) from any designated ashtray. Besides their worries about spies and littering, the North Korean army was also looking for a way to make a quick buck by imposing fines ($20-$100) on any violator. 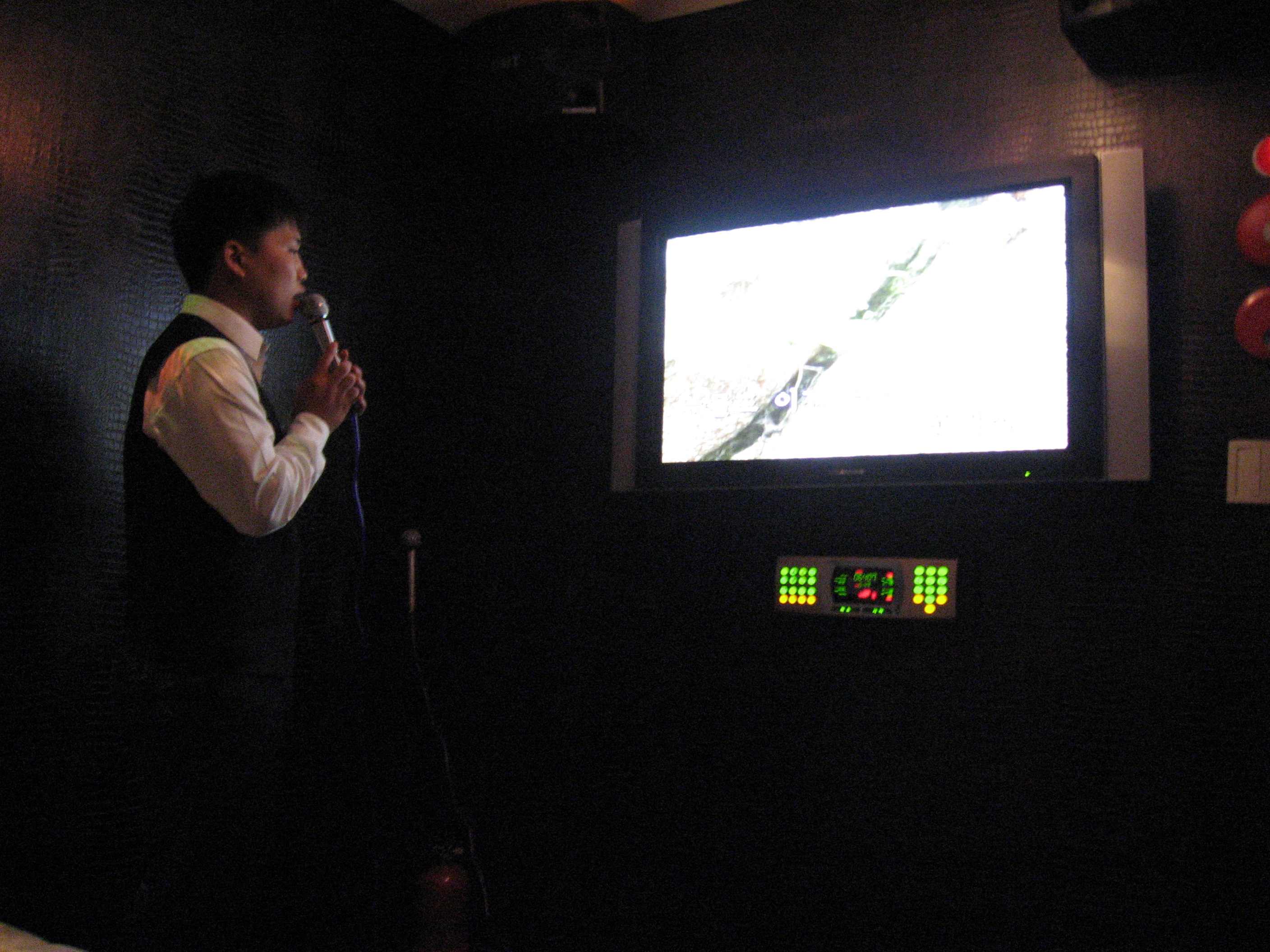 North Korean porter singing with us at the noraebang (karaoke room).

After getting through immigration without any problems, our group was bussed 10 minutes to a village. Again, photographs were not allowed while we were on the buses winding our way through agriculture areas in the foothills of the Geumgangsan range. We passed by a small, run down looking school and a few farmers. My midwestern upbringing took hold when I looked into the corn fields along the road and saw that the stalks were only about two feet tall. It was the first day of July and the corn south of the DMZ was standing at least twice that height. There were also more soldiers with red flags at the ready, stationed roughly every 200 to 300 meters along the road, waiting to catch someone taking a picture through the bus window.

It was hard to determine if the village we arrived at had a name, but from our tourist maps it appears to be called Gulyong Village. The village consisted of two hotels, a hot spa, a food court, a theater, a buffet, a gift shop (with duty-free products), and a Family Mart (one of the convenience stores ubiquitous to South Korean cities). Tucked away on one side of the village were a few rows of apartment buildings that probably housed the people who worked in the area. Also, behind the hotels was an area that housed the soldiers who were stationed around the perimeter of the village. All of the buildings were very modern and reminded me of similar structures at major American national parks.

After a quick Family Mart breakfast, we were bussed to a trail that would lead us to Bibong waterfall. The trailhead was the first place that we saw non-uniformed North Korean citizens. They were easy to distinguish from the other South Korean and Chinese workers because they were all adorned with a lapel pin bearing a portrait of Kim Il Sung. The North Koreans were there to sell food, water, and souvenirs to visitors.

Leaving the trailhead behind, the actual hike was very similar to the hiking I had done in South Korea. The trails were 2 meters wide and well kept, with railings and stairs on the more difficult sections. There were also plenty of ajumas (older Korean women) swinging their elbows at anyone who dared pass to close to them, and ajashis (older Korean men) taking nips of soju (the Korean staple alcohol) - just like on the mountains of the south. One big difference along the trail was that major portions of the rock faces were engraved with writing. Most of the writing was in Korean, but some areas were carved with Chinese characters. The writing consisted mainly of names, who they were I could not find out. The non-name engravings had been painted red on the inside and I was told that they were political messages, and stories.

Red Korean writing engraved on stones throughout the forest.

The natural features of the area were beautiful. The trail ran parallel to a river, criss-crossing it with several bridges. Above were forested cliffs, flecked with rocky outcroppings and spires. Waterfalls appeared around every turn, swollen by the recent rain. The weather was overcast and rainy, which made photographs hard to take, but many scenes of cloud-shrouded mountains gave the hike a mystical feel, much like (one would imagine) walking through Middle Earth.

After a few hours of hiking, we were bussed from the trailhead back to the village to check into our hotel. Our original accommodations were at Geumgangsan Hotel. We were told that because some North-South family reunions had been extended a few extra days, our group would be put up just around the corner at the new Haegeumgang Hotel.

The hotel was first-rate. Clean with a friendly, constantly-bowing staff. A conversation with the night manager (him speaking broken English and me speaking broken Korean) revealed that the staff were all North Koreans. We even talked one of the porters into accompanying my group of friends to an evening session at the Noraebang (singing room).

For entertainment, the village offered an afternoon performance of the world-renowned Pyeongyang Moranbong acrobatic circus. A live band accompanied the performers as they flipped, juggled, and swung from the rafters. The skill of the performers was amazing, although the show lacked the glitz and glamor of a large western big-top act.

The second day of the trip was similar to the first. Up early in the morning to hike Manmulsang, a string of small peaks and rock outcroppings. This hike was much more vertical than the previous day and would have offered some spectacular views of the East Sea (Sea of Japan) had most of the course not been in the belly of a cloud. One could see another difference between hiking in North as opposed to South Korea: posted at most of the peaks and along some of the staircases there were tight lipped and stern looking North Korean (plain clothes) officials. On one steep mountainside, I had my ID badge checked (for the first time since immigration) and my companion was questioned about his country of origin. There were no problems, but we wondered if the security personnel expected to catch a spy on a crowed mountain slope, or if they were just looking to fine a couple of foreigners for minor infractions far away from their Korean-speaking guide. 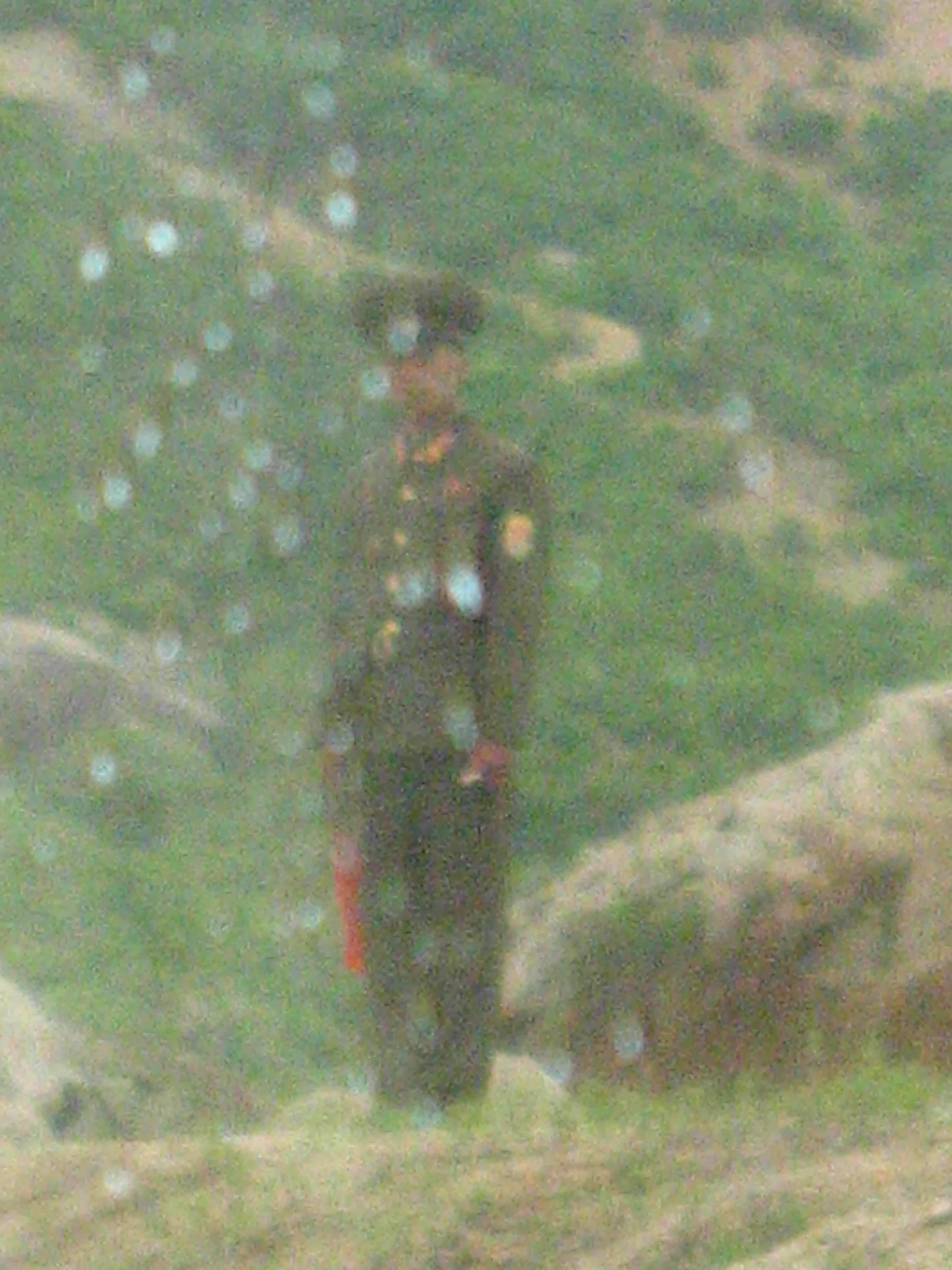 Following a full morning of hiking, lunch at the food court, and a brief afternoon visit to the gift shop, our group loaded onto the buses and headed back to the DPRK immigration checkpoint. The drive back offer another look at the undeveloped countryside. One sight of note was that we saw many more farmers, but the majority of them were hard to spot because they were squatting along the tall grass between the corn fields and rice paddies. It was hard to determine if they were trying to avoid being seen (or illegally photographed) by foreign visitors, or if they were just stopping for a cigarette break. If they were trying to remain inconspicuous, I wondered if they were under orders to do so, or if it was of their own volition.

Passing through immigration raised tension levels again. Being around so many soldiers who have been taught all of their lives that Americans are imperialist devils doesn’t normally set one at ease.

Two events at the checkpoint did directly affect people traveling in our group. The first involved two young women who, by a clerical mistake had the wrong photo on their ID badges. Their names, passport numbers, etc matched their passports, but their head shots had been swapped. The security officers didn’t notice the mess up on the way into North Korea, and they were not happy to discover it on our way out. At first, each woman was charged a $100 fine. After some negotiating and pleading by our trip leader, the fine was lowered to $10 each.

The other item of note was that as we sat on the buses waiting for the previous incident to be worked out, a soldier came to the door and demanded to search the camera of a trip-goer. We were told later that it was a random search for illegally taken photographs. Many of our travelers had taken the risk and snapped off a handful of photos they were not supposed to (many in the moments just before the soldier came to our bus). Luckily, the woman searched was not one of them. There was a feeling throughout the bus that if the soldiers found contraband photos on her camera, they would proceed to search everyone.

The southbound drive through the DMZ was similar to the northbound one the morning before. One main discrepancy was the lack of nervousness and tension, along with the cheers and applause the South Korean soldiers received when we crossed the southern Line of Demarcation.

Not really knowing what to expect at the beginning of the journey, North Korea could hardly disappoint. I had been able to see more of the “real” DPRK than I thought would be allowed, although it was not enough to quench my curiosity. Had it not been for all of the writing along the hiking trails, the North Korean nature was comparable to South: simultaneously breath-taking and organized. The people were friendly, besides declining all requests for photographs and one incident where a doorman I had been chatting with noticeably backed away when he found out I was an American. The atmosphere in the village was apolitical, with the only propaganda being for a united Korean peninsula.

At the end of the day, my trip to Geumgangsan left me wanting a little more. What I saw on that short weekend whet my appetite to travel more of the northern Hermit Kingdom. Maybe it’s the beautiful mountains and rugged landscape that entice me. Or, maybe it’s just because travel in the country is so restricted that makes me want to see more. Either way, with the proper funds and authorization, I would definitely make the trip north again.